Being so very close to the Gulf of Carpentaria, Kris and I felt we could not miss out on a peek at least. Leaving Cloncurry on Monday after saying farewell to our friends, we drove north to Normanton after topping up with fuel and doing some shopping – no Sunday trading here.

Normanton greets its visitors with Savannah Krys, an 8.63m croc shot in 1957 – apparently built to scale, but curiously, we could not find this monster in any record books and it seemed inordinately large – good for a photo though.

Our destination, Gulflander Caravan Park, was hard to miss, not only is it the only caravan park in town, but it boasts a 7m high barramundi, frozen in mid fight – I couldn’t resist a staged pose – landing my only Barra!

Next morning we were at the train station at nine to catch the Gulflander. This is the sad remnant of poor government policy from last century. The train was originally approved to run from Normanton to Cloncurry, where it would join the rest of the Queensland Rail network. Alas, a change of government in the 1890’s and the discovery of gold at nearby Croydon meant the track was diverted and now remains on this odd, closed rail loop (from nowhere to nowhere). The tracks remain almost as laid in the 1890’s, they are unbalasted steel sleepers, which allows the wet season floods to simply run over them. This results in a robust low maintenance track, but at the expense of passenger comfort. The trip was almost too rickety for steady photos or video, but I took that as a challenge. My GPS confirmed that our trip measured 26 km one way, terminating at Critter Camp – named for the creepy crawlies infesting some rail workers who once overnighted there. Whilst the drivers commentary was excellent (he was an engineer who I swapped details with if I ever need to follow his mid-life career crisis path), the scenery through the savannah was relatively dull. The kids enjoyed it, especially James, who regressed into a puppy with his head out the window for some of the trip. 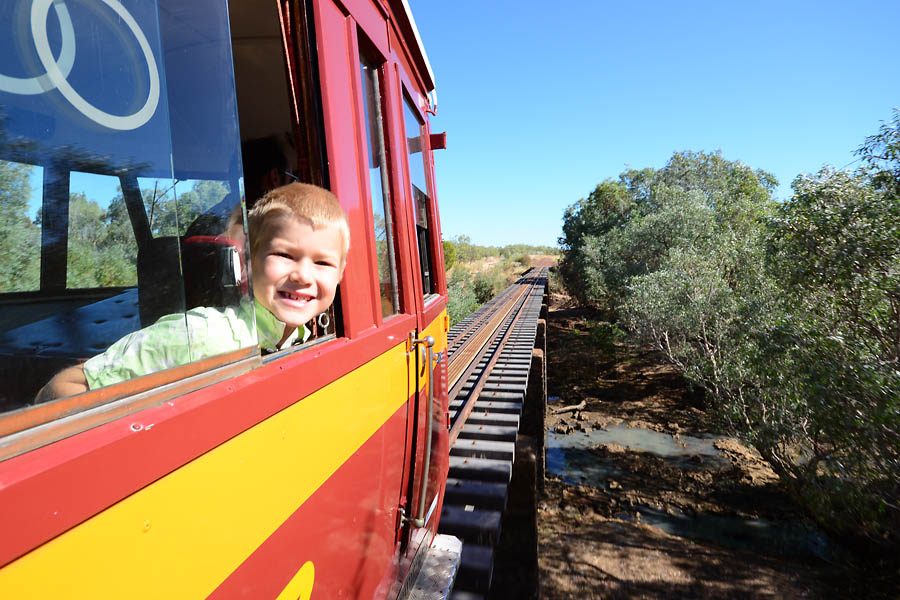 Next day we made the short trip north to Karumba, a nowhere dead-end fishing village on the Gulf. We attempted fishing from the bank of the Norman River in the midday sun, but knowing the river is choccas with crocs, and with a complete absence of bites, made this exercise completely unrewarding. With the Gulf hereby ‘ticked off’, we headed back to Normanton. At least the Brolgas put on a great display en route, they were everywhere, and are majestic on land and in flight.

The uninspiring view of the Gulf of Carpentaria at Karumba.

At least the wildlife was obliging at the Karumba golf course.

After dropping Kris back at camp, I took the boys fishing on an excellent dedicated pedestrian fishing bridge over the Norman River, complete with shade, rod holders, wash down tables and tap water. I expected to nail at least a catfish, but apart from some teasing big bites, we returned empty-handed. As a local noted ruefully “drought on land, drought in the water”.

Dust storm kicked up by cattle being mustered by choppers on the road to Karumba..

One thought on “Normanton”