At Wilsons Promontory we were forewarned of a great slide and flying fox by fellow travelers somewhere on route to Lakes Entrance. I used one of my favourite traveling apps “Playground Finder” to locate this particular gem at Bairnsdale. Not only did it have a large pull in space for caravans, but awesome play equipment and a BMX track as well. The boys whizzed around while Julian and I enjoyed a coffee. 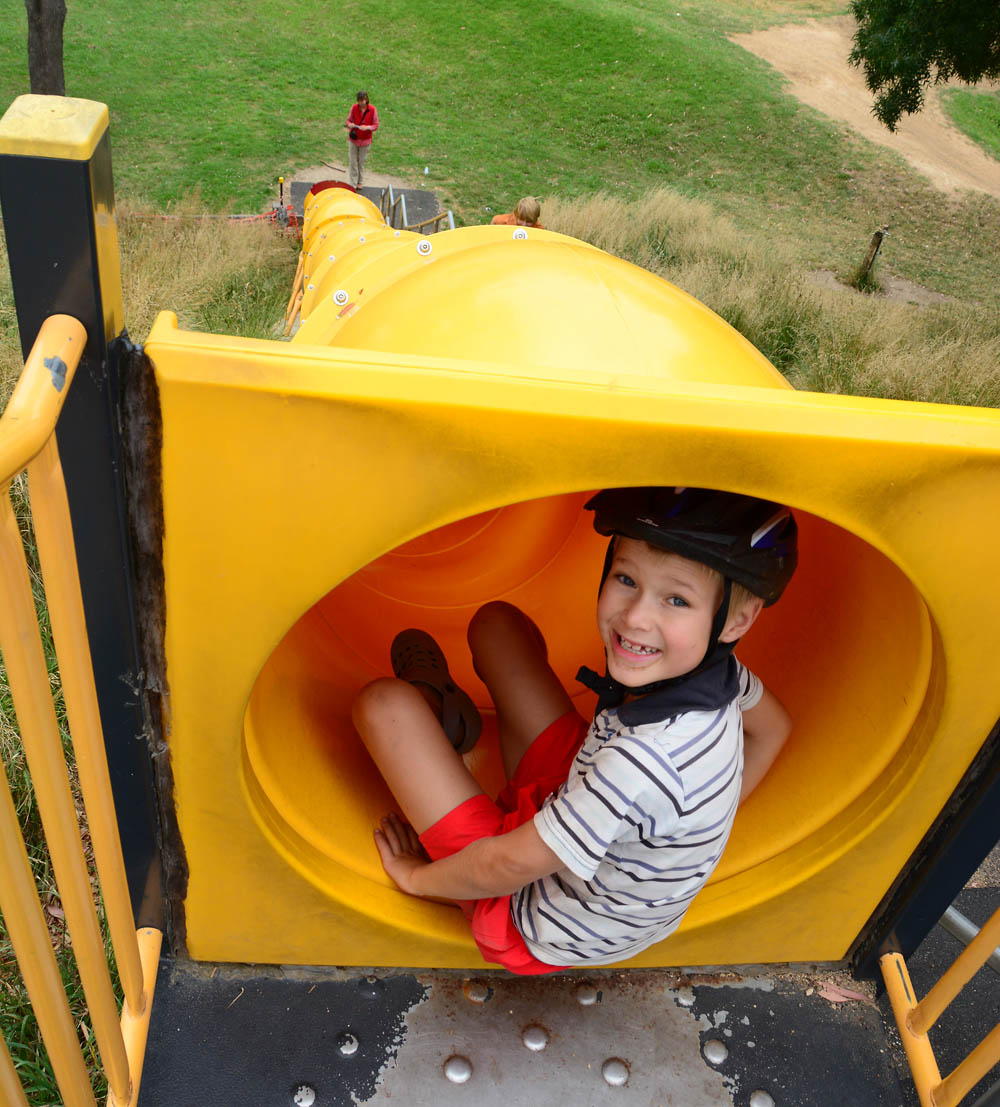 The boys were trilled to get airborne several times during their slide and an old towel made it “scary fast”. 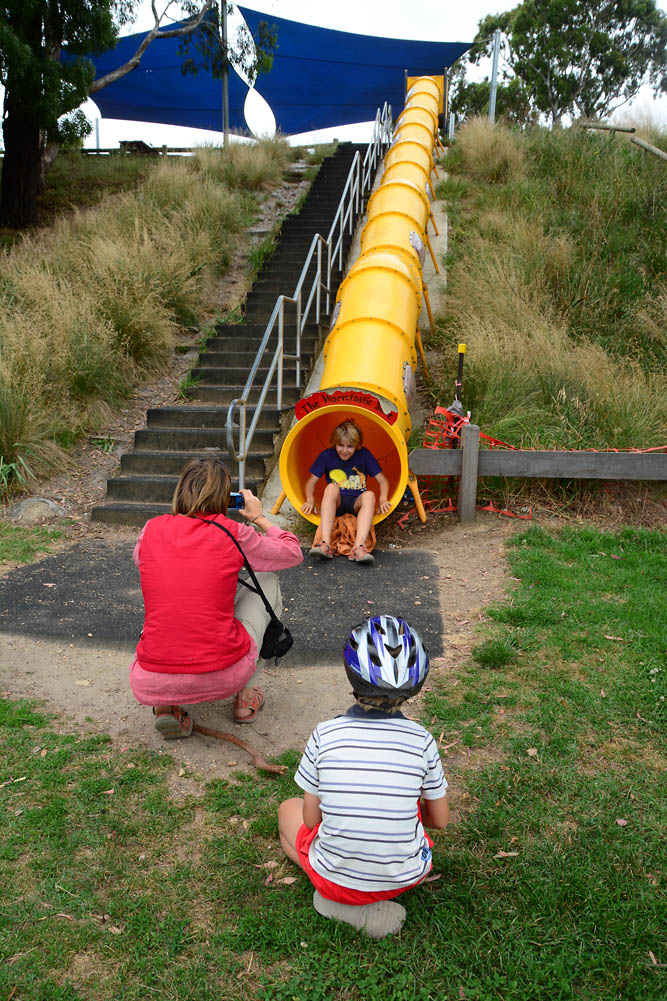 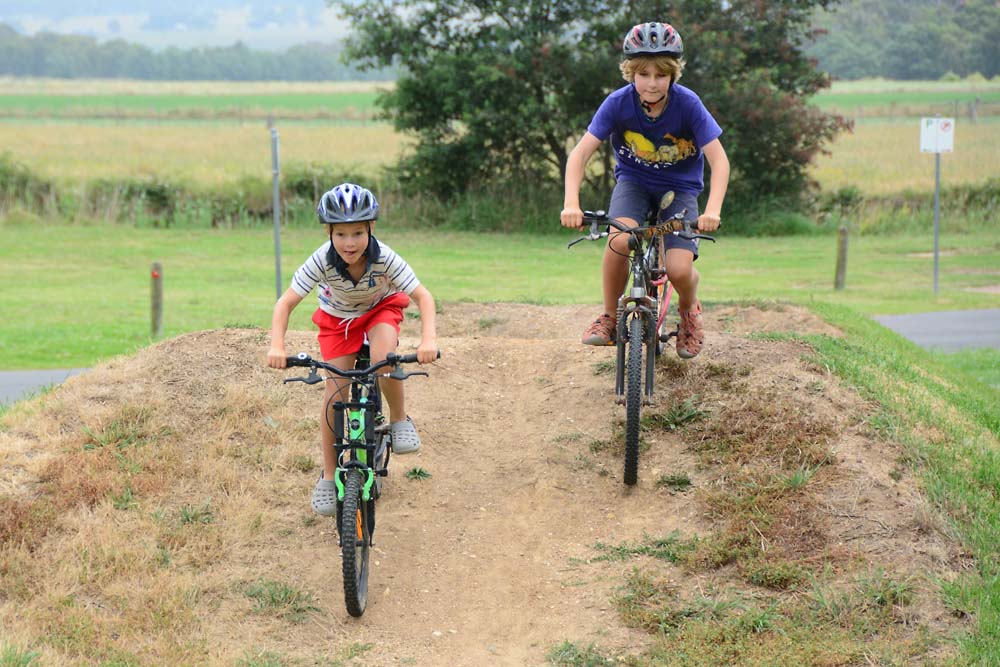 Another short drive along the coast and we arrived at Lakes Entrance, which proved to be a lovely little seaside town, with water, marinas and boats seeming to surround you on all sides. We stayed at a community run recreation reserve come caravan park. Our site was right on the lakes edge which the boys loved and it was beautiful when the weather was kind. Over our four night stay there we had rain, 50km/hour winds, along with sunshine and millpond conditions. Victoria really has very variable weather. I was lamenting the two months we had from Broome to FNQ where I didn’t need to check the weather forecast once – it was always 32 degrees and sunny! 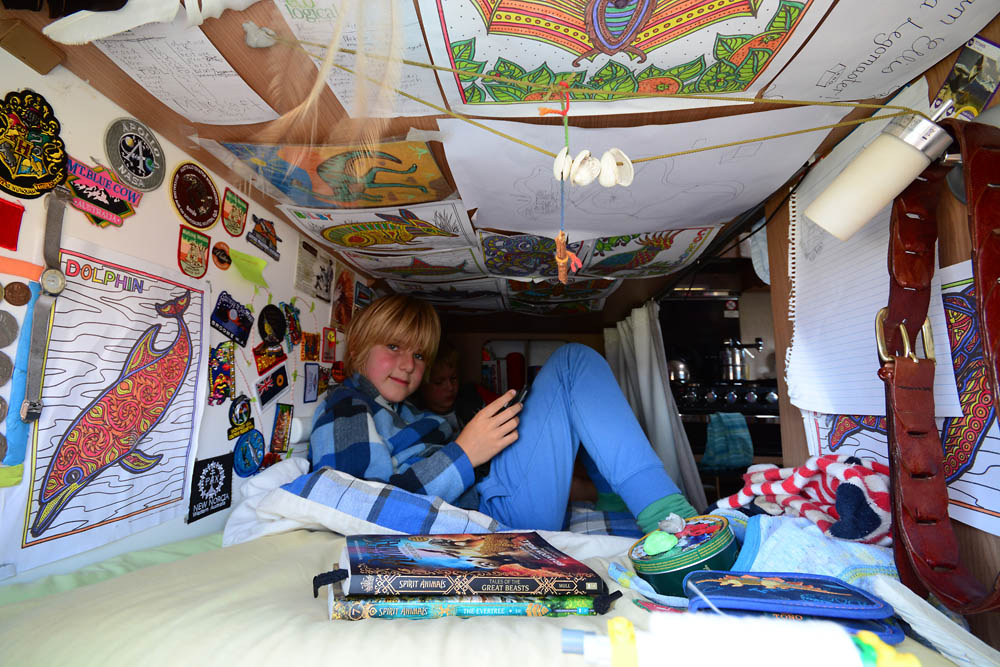 The boys holed up in Sam’s bunk during the inclement weather. 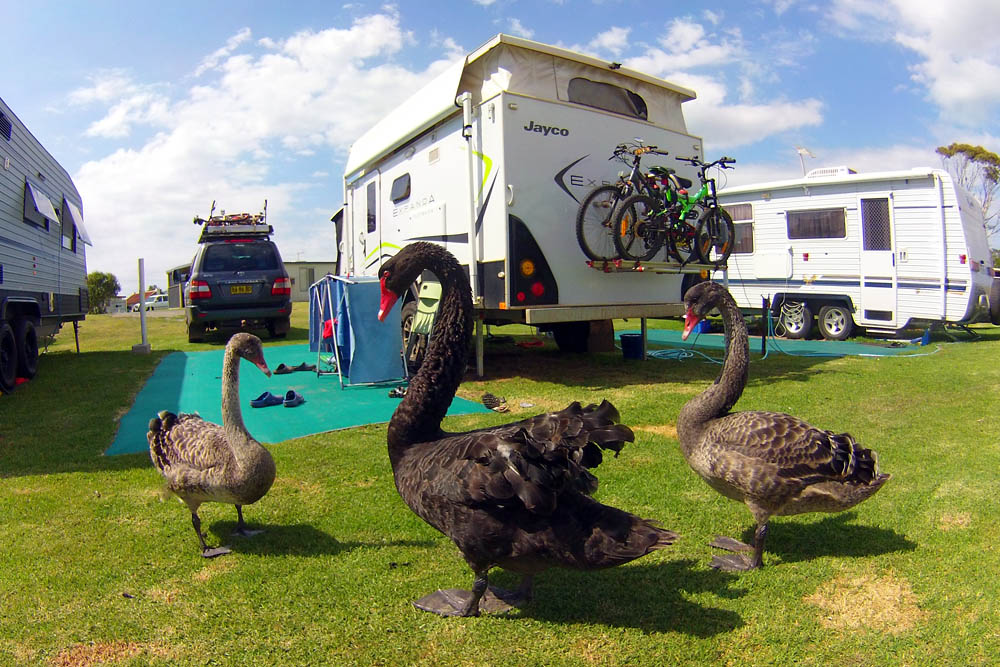 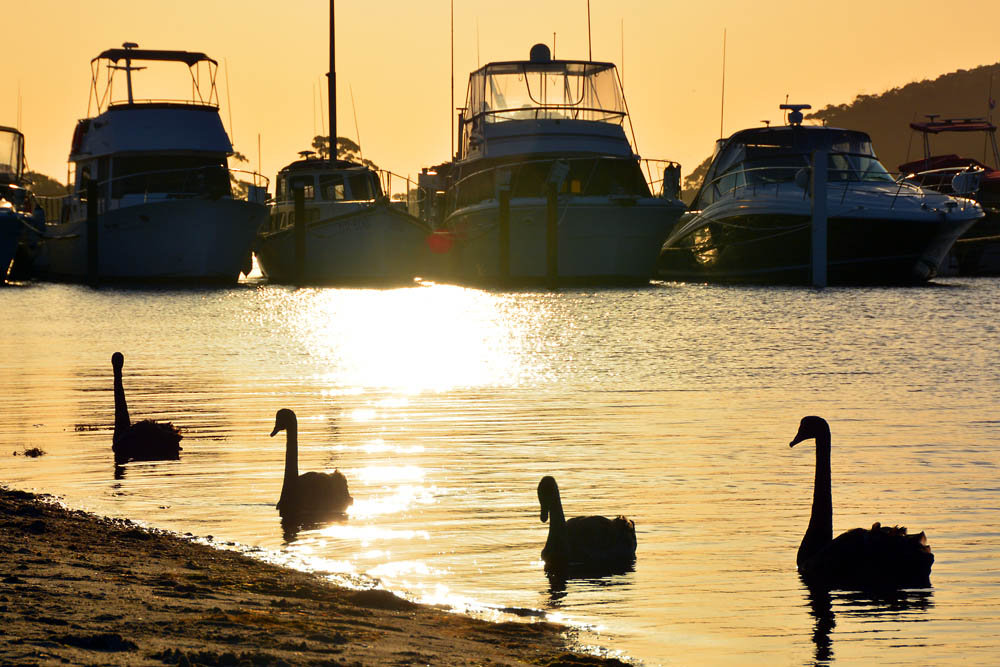 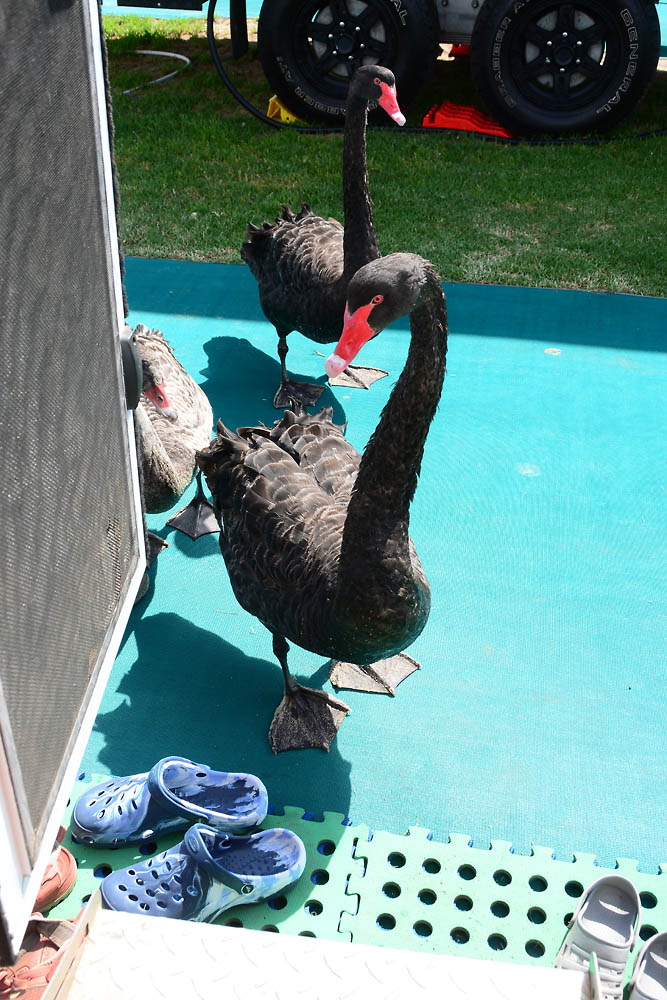 One ever present threat of our water side location were rather enormous black swans. In particular, one family comprising mum and dad and two cygnets who hovered around the camp sites honking for food. Whenever we’d come back, their honks could be heard right outside the door. Luckily they were not too aggressive and their only defence mechanism was a baleful hiss! We noticed they (and the resident pelican) would waddle out of the water to poo if the mood took them. Keeping the river clean I suppose.

Apart from walks around the marina in gale force winds, we visited growers markets at nearby Metung, and took the opportunity to visit the largest silt jetties in the world. These are near Bairnsdale and separate lake King from the Mitchell river. Most definitely more impressive from the air. 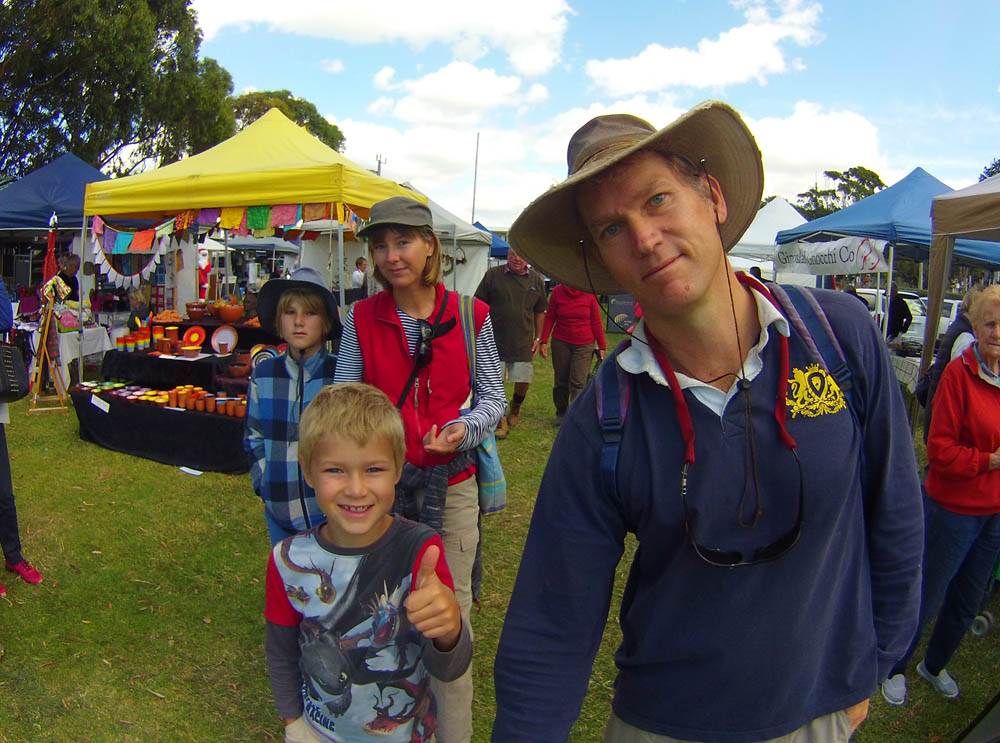 Metung markets at the Village Green and another cool Playground. 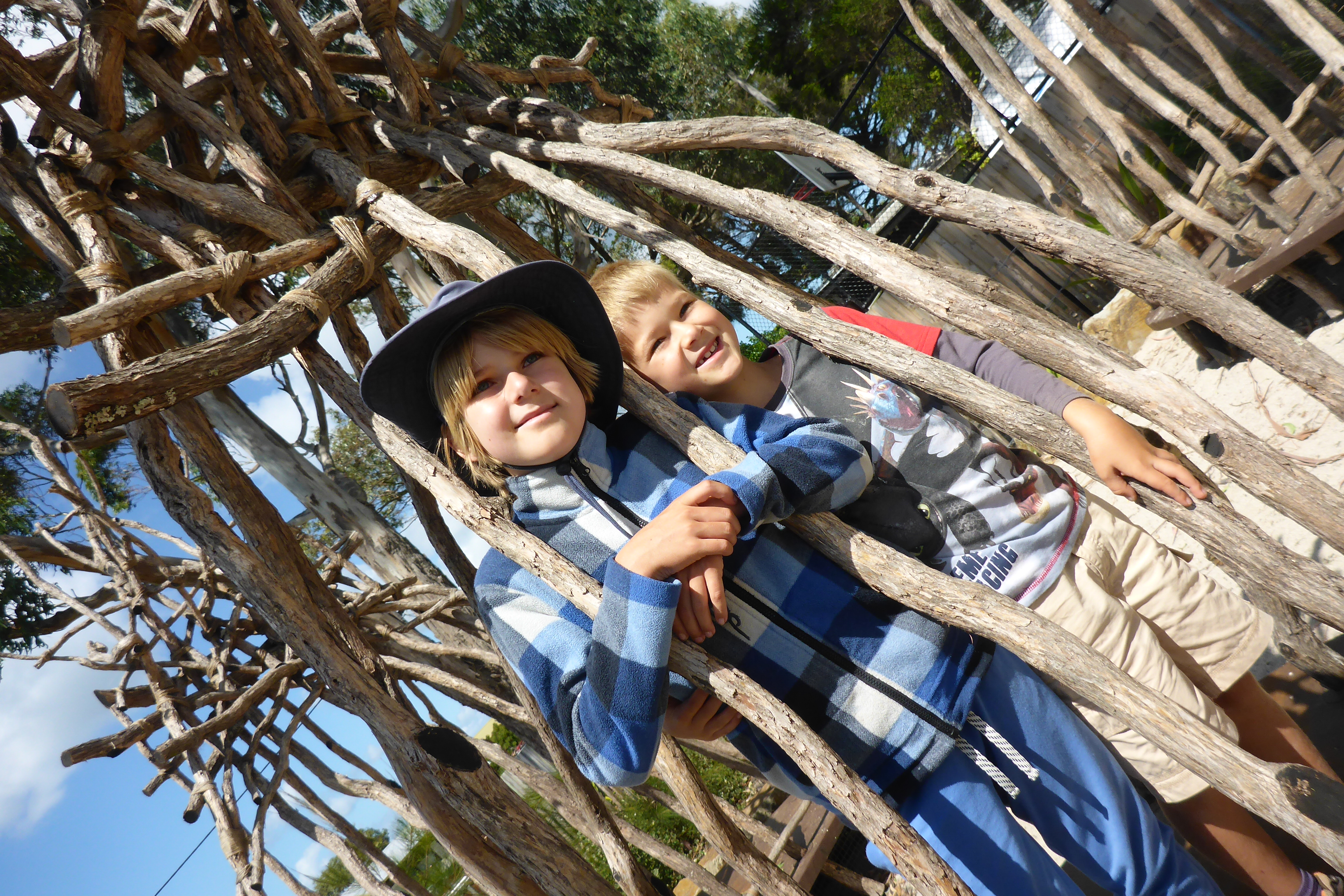 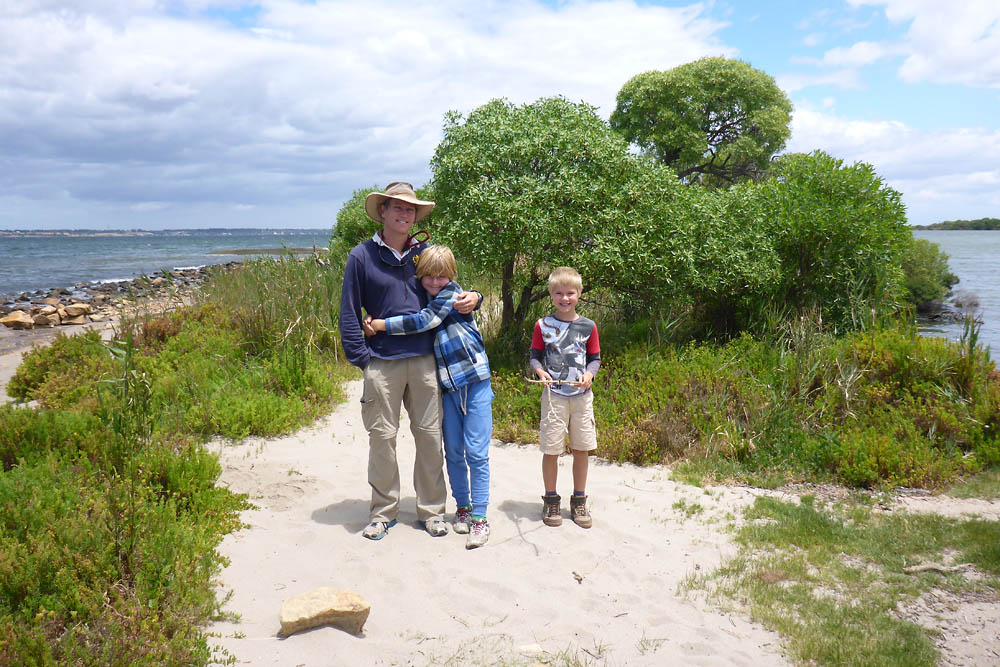 The Mitchell River on one side and Lake King on the other. 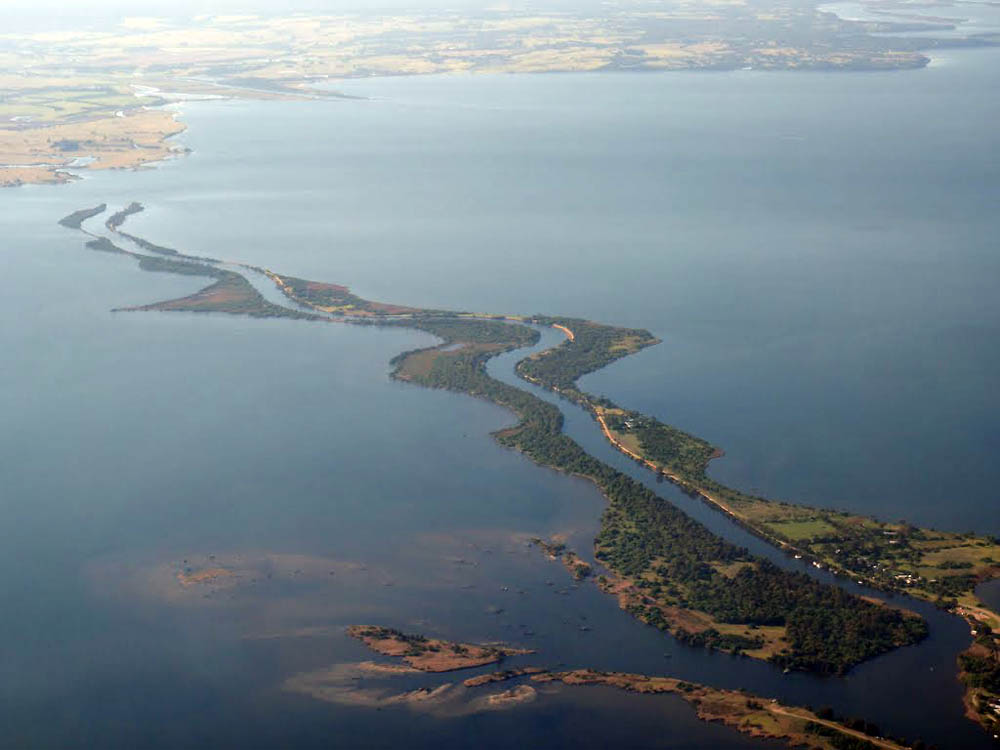 We had been waiting for the wind to die down, and on our last full day our wishes were granted. Just a few hundred meters up the road are little diesel putt putt boats for hire. No license required (and very little instruction). The only fairly obvious advice was ‘don’t go into the open ocean’. Hmm, we were tempted there for a moment!

We cast lines and had a few nibbles, but I think the towns bustling fishing industry extends to the amateur hacks on the lakes as well. Our little boat had to be hand cranked to start. J –  Now I know what starting a Model T Ford must have felt like! Flat chat it was only a tad faster than the incoming tide, meaning our return was right to the minute. All in all a lovely day.

The boys filled in time playing happily on the beach. To get ready for soccer season back home, James and Julian also managed to kick a ball around the adjacent oval.

View from the van on our last night.