Kris wanted to write this post, but she’s out showering the kids, so here I go…  After perusing the gift shop at New Norcia, we stopped in at Gingin for a cheesy ‘tonic tonic’ combination photo opportunity. We also topped up with the fuel of the devil for $1.27/l, I wonder what proportion of diesel was in that?

Next stop was the Gravity Centre just outside Gingin. It was here that, along with similar facilities in Italy and the States, an array of the worlds most powerful and accurate lasers, arranged at 90 degrees to each other, and shining over several kilometres through tunnels into a prism and sensitive detector that sits in a near absolute zero chamber, scientists were able to detect gravity waves. These were first predicted by Einstein, and are ripples caused by the Big Bang, 12 billion years ago (give or take  a couple of billion years!).  This is hard-core nerd stuff, and very exciting. It also gives me reassurance that our future is grounded in science, kind of lucky given my vocation!

The centre itself is very well setup, aimed mainly at kids, and shows many hands-on aspects of physics and science, including existential excerpts stencilled across the walls, such as ‘matter tells space how to curve, space tells matter how to move’ backed up with relevant equations. They also try to explain black holes, relativity, curved space and dark matter. Apart from a giant Foucault’s Pendulum (proving the earth rotates!), one draw card is a 45 m high tower, tilted purposefully at 15 degrees (much more than that wussy 5 degree tower in Pisa), that encourages you to drop different sized water balloons to a target below, showing that, as Newton patiently explained, acceleration due to gravity is independent of mass, making gravity the constant. Choosing water balloons is clever because they form a natural sphere when they fall, irrespective of size, and are fun for the kids. I had the joy of climbing the tower twice to repeat the experiment after James didn’t quite manage to synchronise his first water balloon release – his tears would have filled one of the balloons!

Success at last – proving for ourselves Newton’s law of gravity!

Another draw card is a scale solar system, with each step being 4,000,000 km (about one and a quarter light seconds if that’s easier to digest). The kids walked the 2 odd kilometres from the sun to Pluto, demoted in 2006 from planet to planetoid (sad I’m sure for the Americans, who discovered it). Because our monastic spending spree had delayed our departure, we didn’t get away until the Centre closed at 4pm. Luckily, our stop for the night was at a Big4 camp site at Ledge Point, a mere 57 km down the road.

After our single night at Ledge Point, where the boys made as much use of the jumping pillow as time allowed, we parked Alice at reception and went 10 odd km up the road to Lancelin for some sand dune heaven. After stopping briefly to hire a proper sand board (a worthy investment because Boogie Boards do NOT work), we went to the closest dune and tried our luck. Not unlike skirfing in Perth, I was able to expertly show the boys how to fall off when attempting to stand on a sand board (sand is a lot harder than water). Better next time to sit down! The boys (and even Kris) had many runs down the slope and we all had a lot of fun. After adequate GoPro evidence of our hilarity, we went back into Lancelin after our two hours of hire was up, turned around, and on my insistence went straight back out to the dunes! 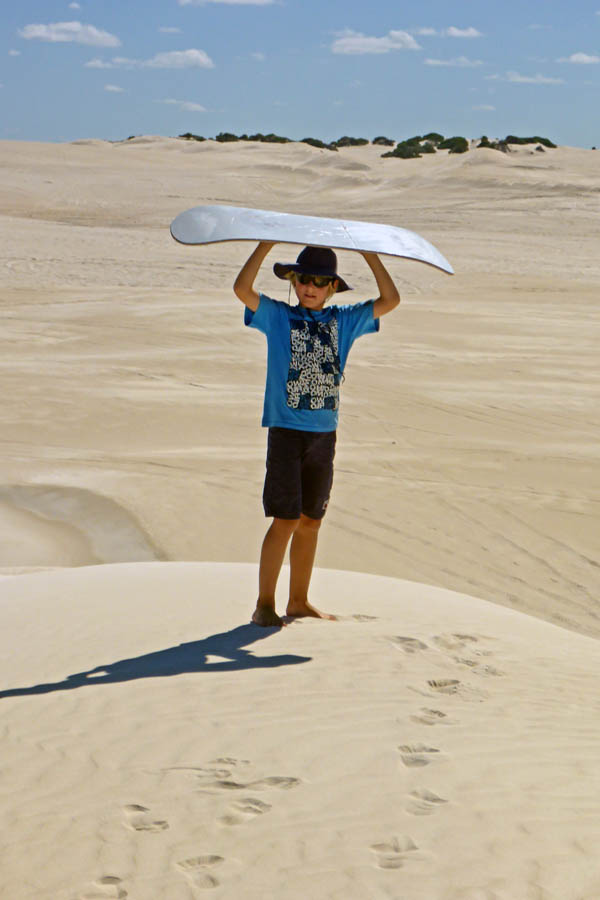 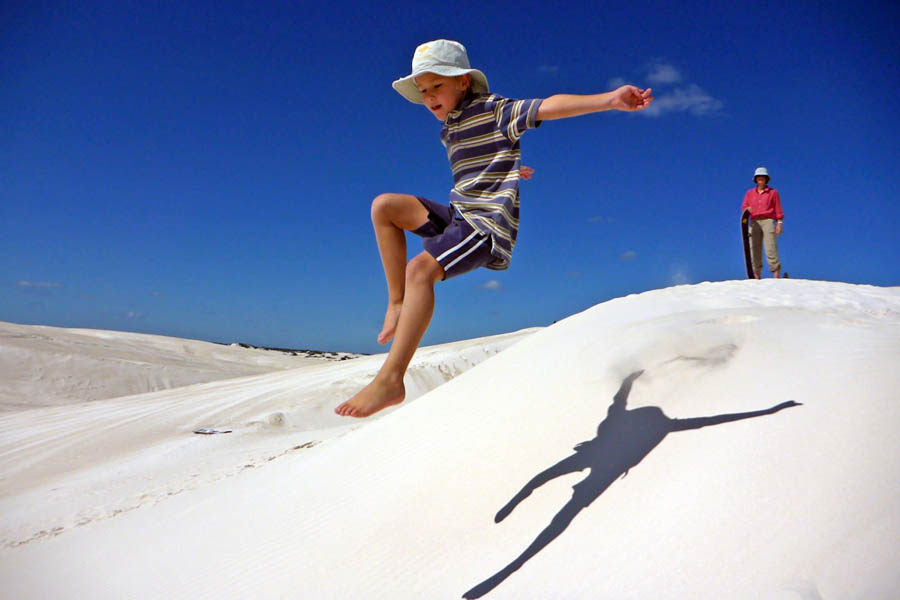 With squishy deflated tyres, we explored a tiny section of the dunes. Our approach was that discretion is the better part of valour when it comes to stupid 4WD dune antics, so we took it easy, and after being sand blasted having sandwiches in the sand dunes, we reinflated the tyres with the new monster compressor and headed to Cervantes.